The recently released Cyber Crime and Security Survey Report 2012 conducted by CERT Australia, in partnership with the Centre for Internet Safety at the University of Canberra, is readily available from CERT Australia’s public website – see www.cert.gov.au.

It is highly recommended reading for IT & Information Security professionals within Australia.

Some 450 businesses were approached to participate in the CERT Australia Cyber Crime and Security Survey, from which the report was developed. It is suggested that you share the report with your IT colleagues (and vice versa).

The report highlights cyber security issues and may be suitable for referencing as external source - providing justification for funding of IT/control system security initiatives.


The survey consisted of 24 questions, both closed and open ended, to ascertain:

The findings from the survey provide a picture of the current cyber security measures these businesses have in place; the recent cyber incidents they have experienced; and their reporting of them.

Mandiant's findings appear in a comprehensive report issued Feb. 18 that the security firm contends documents how APT1 has breached computers in enterprises that conduct business mostly in English, especially in the United States [see map below]. China denies the allegations presented in the report.

According to Mandiant, the data stolen relate to:


Mandiant says it's often difficult to estimate how much data APT1 has stolen during its intrusions because the People's Liberation Army unit deletes the compressed archives after it pilfer them, leaving only trace evidence that is usually overwritten during normal business activities. 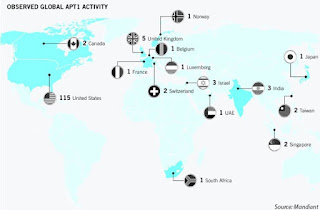 Posted by Unknown at 8:59 PM No comments:

Even the most savvy information technologists aren't immune from cyber-attacks. Just ask Facebook. The social-media titan says it fell victim to a sophisticated attack discovered in January in which an exploit allowed malware to be installed on employees' laptops.

In a blog posted by Facebook Security on Feb. 15, the company said it found no evidence that Facebook user data was compromised.

Here's what happened at Facebook, according to its blog:

The compromised website hosted an exploit that then allowed malware to be installed on these employees' laptops. "The laptops were fully-patched and running up-to-date anti-virus software," the blog says.

"As soon as we discovered the presence of the malware, we remediated all infected machines, informed law enforcement and began a significant investigation that continues to this day." Facebook Security flagged a suspicious domain in its corporate DNS (Domain Name Servers) logs and tracked it back to an employee laptop.

The security team conducted a forensic examination of that laptop and identified a malicious file, and then searched company-wide and flagged several other compromised employee laptops.

The social-media company says it is working with law enforcement and the other organizations affected by this attack. "It is in everyone's interests for our industry to work together to prevent attacks such as these in the future," Facebook says.

The Facebook attack is reminiscent of the 2011 breach at security provider RSA, when a well-crafted e-mail tricked an RSA employee to retrieve from a junk-mail folder and open a message containing a virus that led to a sophisticated attack on the company's information systems
Posted by Unknown at 5:21 PM No comments:

In-House App Stores is MUST for Enterprise?

As personal mobile devices become ubiquitous in corporate networks - even in organizations without official bring-your-own-device policies - IT and security personnel are implementing new approaches to prevent malware and ensure data integrity.

One approach beginning to take root is the creation of in-house corporate app stores, where organizations offer users access to custom-built, secure applications designed specifically for that organization, along with access to approved public apps for smart phones, tablets and other personal devices.

With malware infesting the authorized commercial app stores, including the two largest - Google Play for Android and to a lesser extent, the Apple iOS App Store - corporate security and IT executives are exploring new strategies to limit the use of unauthorized applications on devices connected to corporate networks.

Because of the rapid growth in the use of personal devices for work-related tasks, IT departments generally do not permit users to install any application on corporate computers but many companies still have not yet established similar policies for personal devices.

Companies that opt for a private app store can minimize much of that risk by requiring users to select only from applications that are certified by their employer as safe.

Any suggestions or ideas?
Posted by Unknown at 11:43 PM No comments:

An Embarrassment is Coming

If they don't invest the time in reviewing the information that's been published about them, Facebook users are in for a potentially embarrassing surprise. That's because Facebook is working toward making more of its content searchable with its Graphs Search feature.

What will be searchable? All the information (personal, professional, pictorial) you post, and that other Facebook users post about you. Additionally, your likes, and in many cases simply the websites you've visited that have hooks back into Facebook, will be searchable.

This article explains it well, and in it, writer Meghan Kelly gives one of the best analogies for Facebook I have read:

Facebook is like a safe containing a ton of your personal information - which you've purposefully and willfully cracked with an axe.

Beyond searching for what's already out there about you, commit to practicing good social etiquette. Don't "check in" your friends for them (without their knowledge!), post pictures of them they may not appreciate or tag them to one of your posts without their permission. Even the tamest of details may cause trouble for them, not to mention, trouble for your relationship.
Posted by Unknown at 8:58 PM No comments:

Being "tagged" on Facebook means another user has added content and publically associated you with that content. A friend may post a picture of you at the beach. By tagging you, that photo will show up on your profile (if your settings allow).

There is a setting in Facebook that allows users to approve any tags before they are posted to their timeline. This blog post on Business2Community does a great job of showing readers exactly how to set Facebook to alert them to requests for tags.

This isn't just a good way to easily give friends permission to tag you; it's an excellent way to keep track of the content in which you've been tagged. Who needs to have someone else associate them with things to which they have no legitimate connection?

The post goes on to explain the difference between Facebook Profiles (now known as "Timelines") and Facebook Pages. There are some unique features about Pages that make these tags post differently, so if you manage a Product, Brand or Person Facebook Page, this will be an especially good article for you.

Posted by Unknown at 8:53 PM No comments:

The guidance reviews how merchants can work with third parties to address those risks and provides a checklist for easy-to-fix vulnerabilities related to:

Posted by Unknown at 8:46 PM No comments: