Verizon Infographic: Why PCI Compliance has to be a Business-Wife Priority?

In 2013, only 11.1% of companies were PCI compliant on their initial assessment! 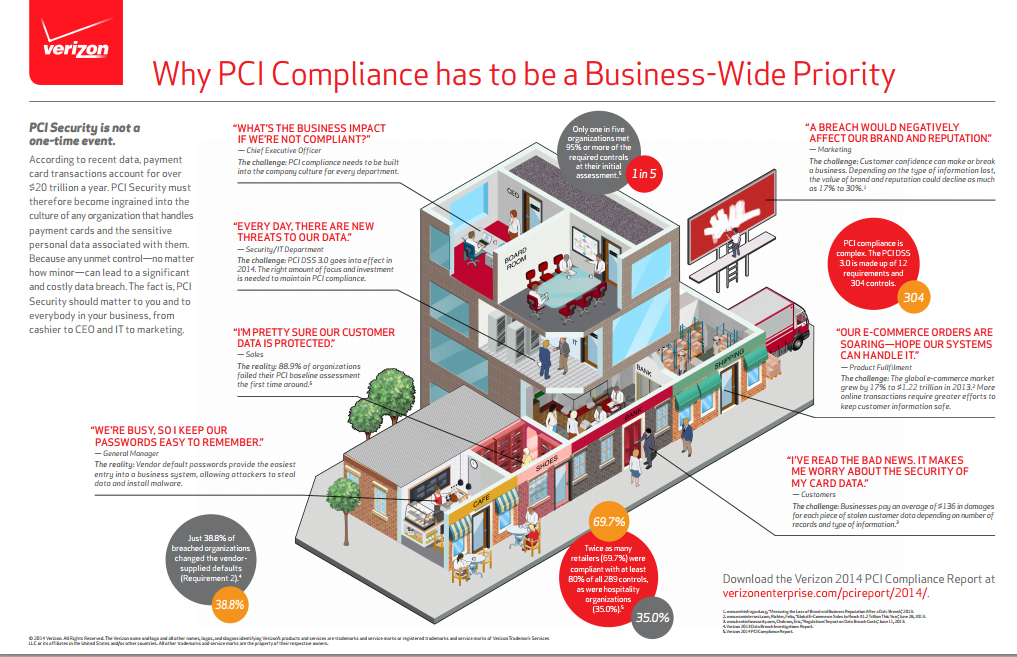 How secure is "Dropbox"?

Basic Overview and Awareness to Secure Your DropBox Account!

Dropbox is a free and extremely easy-to-use tool for sharing files, photos, and videos, and syncing them among your devices. You can also use Dropbox to back up files and access them from other computers and devices (including smartphones and tablets), with dedicated apps for each device you own running Android, Mac Linux, Blackberry or iOS platform.

Dropbox is especially good for backing up your files online, although the biggest barriers to this are the size of your backups. You get 2GB free with Dropbox, or you can choose 100GB, 200GB, or 500GB with a monthly fee. There are also business plans that start at 1TB for five users. You’ll just have to make sure that the files you want backed up live in the Dropbox folder.

Dropbox also has the ability to share files with others. And, if your computer melts down, you can restore all your files from the Dropbox website.

Is Dropbox "Safe" to use?

The move on hosted services like Dropbox storage site raises questions about what cloud users can and should do to keep their information and data secure and compliant.

Cloud security drew attention in 2012 with Dropbox’s admission that usernames and passwords stolen from other websites had been used to sign into a small number of its accounts.

A Dropbox employee had used the same password for all his accounts, including his work account with access to sensitive data. When that password was stolen elsewhere, the attacker discovered that it could be used against Dropbox.

This was a powerful reminder that users should rely on different passwords for each secure site and service.

Also, VentureBeat reported that the Dropbox iOS app was storing user login credentials in unencrypted text files—where they would be visible to anyone who had physical access to the phone.

What Encryption does Dropbox use?


At Dropbox, the security of your data is our highest priority. We have a dedicated security team using the best tools and engineering practices available to build and maintain Dropbox, and you can rest assured that we’ve implemented multiple levels of security to protect and back up your files. You can also take advantage of two-step verification, a login authentication feature which you can enable to add another layer of security to your account.

When it comes to encryption methods Dropbox use, they state that:

Dropbox uses Amazon’s Simple Storage Service (S3) for storage, which has a robust security policy of its own. You can find more information on Amazon’s data security from the S3 site or, read more about how Dropbox and Amazon securely stores data.

When and if you decide to use cloud services like Dropbox, the following three basic steps can help you protect your data:

Breach at Target appears to have started with a malware-infected email!

Target Corp. and other large retailers have made the news due to data breaches, but businesses of all sizes need to make sure they have up-to-date policies and procedures to protect private data.

The breaches at Target highlight how important it is for organizations to know how secure their networks are?

Here are four measures businesses should take to ensure their data stays private.

The Internet of Things

"The Internet of Things" is now finding its way into mainstream conversation!

Once a term used mostly by MIT professors and those steeped in the privacy and security field, "The Internet of Things" is now finding its way into mainstream conversation. Loosely defined as the practice of equipping all objects and people in the world with wirelessly connected, identifying, computing devices, the term represents what could be a hugely transformational way of life.

At one time, "The Internet of Things" probably sounded like science fiction; but today, it's becoming very real. Here are a few examples of where you can literally see, hear and almost feel this phenomenon occurring in some very ordinary places:
Posted by Unknown at 11:27 PM 1 comment:

Cybersecurity in the age of "Surveillance"

How to assure that your network and its data are being guarded by a trusted partner?

The collection of information generated from the online activities of citizens, by both private and public interests, has become so widespread and pervasive that it has prompted several social commentators to label today’s digital-defined culture as “The Surveillance Age.”

The fact that nearly every sovereign state with the means is conducting high-tech surveillance programs, a practice that is considered by most to be integral to national security and ensuring the safety of the state and its citizens. For many observers, the most disconcerting component of the recently exposed data-collection activities of the National Security Agency was tied to multiple U.S. companies may have cooperated in the surveillance activities.

The possibility that trusted businesses could be leaving digital backdoors through which sensitive information could slip has cast a chill across both consumer and professional market sectors. This issue is not for us to speculate here; however, given the interest it has attracted, it would be valuable to share some fundamental information about mobile security, as well as some guidance to assure that your network and its data are being guarded by a trusted partner.

A key element of security is encryption technology, which is critical to protecting the confidentiality and integrity of a digital transaction between two endpoints, such as a mobile device and a corporate server located behind a firewall. Providing an integrated approach to mobile security, in which data is encrypted while at rest (stored on a digital device) or in transit, is the best protection against the loss of data or a security breach that could impact the profitability, competitiveness, or reputation of an organization. Strong encryption guards against data integrity compromises in these environments, which are typically treated by network engineers or mobile security experts as hostile and untrustworthy

It’s important to note that encryption technologies differ significantly in the degrees of protection they offer. To gain a deeper understanding of encryption requires an introduction to a few esoteric cryptography terms. One of those terms is entropy, which plays a significant role in determining the effectiveness of a modern encryption system. At a very high level, entropy is a measure of how much randomness you have. Simply put, the more entropy you have the more effective your encryption can be. Consider the differences between seeking a needle in a haystack and looking for one hidden in an acre’s worth of haystacks. The procedures are essentially the same; it’s the level of difficulty and complexity that differs substantially between the two scenarios.

Any discussion related to digital intrusion or surveillance has to include spyware, which is a form of malware. Businesses or organizations using mobile devices that have open development platforms are especially susceptible to attempts to exploit users through spyware. It is also a favorite tool of cyber criminals, who are increasingly targeting mobile devices as access points into the confidential data of organizations for purposes that range from nuisance to nefarious.

Disguised within a consumer application, malware can be used to gain access to personal information, for anything from marketing to identity theft to compromising corporate data. This real and growing threat requires security solutions that properly safeguard the privacy of governments, enterprise workers, and individual users.

The fact that the number and utility of mobile devices will only increase means that the boundaries of the modern organization are being stretched to include hundreds or even thousands of mobile end points possessing access to the most precious assets, such as intellectual property and other sensitive information.

Security in this environment cannot be an afterthought. It must be built in at every layer -- hardware, software, and network infrastructure -- to ensure end-to-end protection. With the stakes so high in “The Surveillance Age,” it’s imperative that you demand "confidentiality & integrity" commitment from every partner you trust with your information.
Posted by Unknown at 11:54 PM No comments: